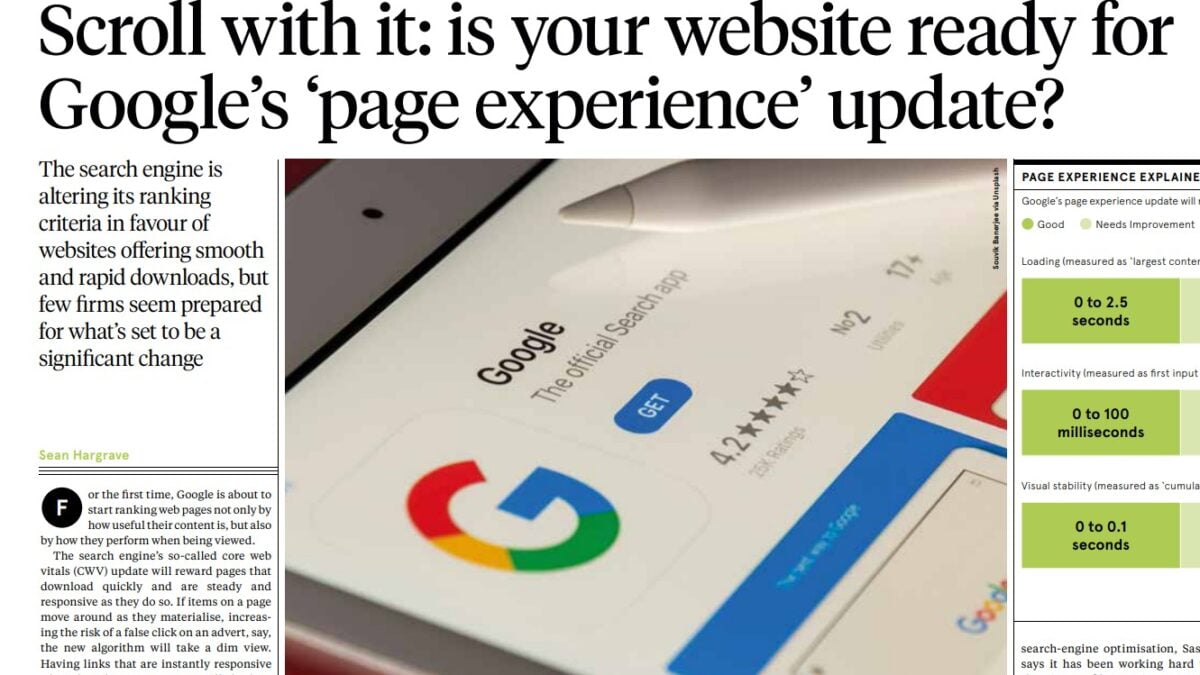 Scroll with it: is your website ready for Google’s ‘page experience’ update?

The search engine is altering its ranking criteria in favour of websites offering smooth and rapid downloads, but few firms seem prepared for what’s set to be a significant change or the first time, Google is about to start ranking web pages not only by how useful their content is, but also by how they perform when being viewed. The search engine’s so-called core web vitals (CWV) update will reward pages that download quickly and are steady and responsive as they do so. If items on a page move around as they materialise, increasing the risk of a false click on an advert, say, the new algorithm will take a dim view. Having links that are instantly responsive when they show up on screen will also be a key criterion for a high ranking.

The update references all the ‘page experience’ attributes a site must possess to satisfy the search engine. This was originally due to start applying in May but has been postponed to June, with a full implementation due by the end of August. The reason for the delay could well be a lack of awareness among website managers. When Searchmetrics recently analysed 2 million sites, it found that 96% offered a page experience that would be deemed substandard. Jonathan Hopper, CEO of Garrington Property Finders, is not surprised by this finding.

He believes that many companies are “asleep at the marketing wheel” and underestimating the impact of the update.“Businesses should be approaching this with a good dose of fear and a sense of opportunity,” argues Hopper, who has been studying the update’s implications. He believes that a good starting point for website managers would be to focus on the part of the page that viewers don’t see until they start scrolling. “To defend our top positions in search, we at Garrington have worked hard at speeding up the performance of our site by compressing pictures and also by bringing in ‘lazy loading’.