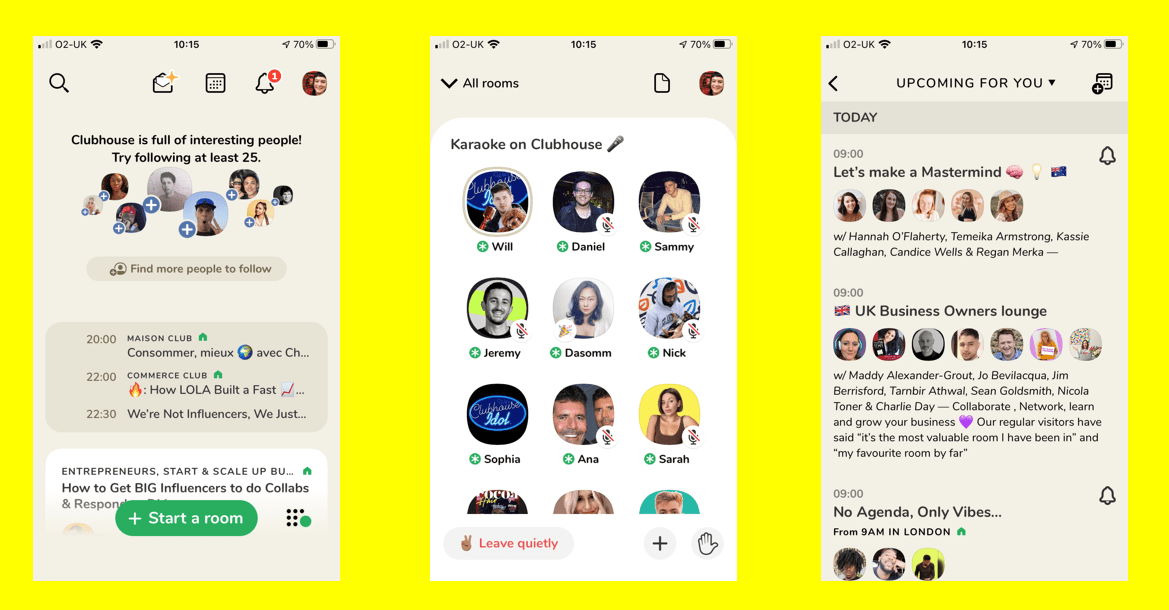 Why is everyone talking about Clubhouse?

There’s a new invite-only social app which is causing minor waves among marketers and early adopters around the world if my LinkedIn feed is anything to go by.

I have finally scored myself a Clubhouse invite so I can report to you what it’s like inside.

At first glance, everything about Clubhouse is a bit strange. This is not just another Facebook, and it has none of the familiarity of popular social media channels. For a start it’s audio-only – a far cry from the visually stimulating news feeds of Instagram and TikTok. Even its app icon is odd – a black and white photo of a guy clutching a guitar rather than a cute little symbol.

The experience is a bit like a conference where you wander about into different ‘rooms’ and hear what people are saying in them. You can pop in and out at will – and each room has assigned speakers and an audience. All the rooms are about different subjects indicated by their name – I heard a little about pitching your start-up, ensuring your chakras are aligned, and a bit about the music industry. One was in Mandarin so I am not sure that that one was about. Much like a conference the only people I heard talking on my first foray were men – but perhaps I am not following the right people yet. One room I entered had an audience of 3,000 members.

Like any social network – your inputs will form your output. Follow the right topics and people and you should be rewarded with content that interests you. My first visit was not the most scintillating – but as I stick around and refine who I am following that should improve.

What is Clubhouse for?

Users can listen to panels, conversations and discussions from influential people in that area. It’s somewhere between a live podcast and an industry conference. And once it’s done it’s done – the platform doesn’t save the conversation for later. It’s a live, by-appointment platform.

When you join up you can follow individuals and topics so the ‘rooms’ are tailored to you.

Why have I heard of Clubhouse?

In early February Elon Musk hosted a chat with the CEO of viral trading app Robinhood – the chat was also livestreamed on YouTube – which spiralled it out to the mainstream. In mid-February it was booted out of China – where it had been very popular due to the lack of censorship.

Why is Clubhouse so popular?

Although it’s a live audio platform, you can listen to others without there being any requirement to speak, and you can dip in and out of rooms without announcing your coming and going in a prominent way, so users can enjoy listening passively.

The audio-only element is interesting because it means that you can engage while doing other things – a little like the way people engage with radio. You don’t need to be staring at your screen the whole time – although there’s the option to lean in and join discussions if you like. This brings to mind YouTube’s recent decision to offer audio-only ads – aimed at the large number of people who use that app in a more passive way.

Currently, Clubhouse is populated by influential techy types and users with big social followings on other social networks – and there’s an air of exclusivity from the invite-only nature of the launch.

Why is it invite-only and how can I get one?

The hype, silly! No one wants anything more than the thing they can’t have. So, if you want in you need to know someone who is already in there. Every member gets two invites when they join.

You can expect the app to open up to the general public in time.

How big is it?

As of the beginning of February 2021 Clubhouse has 2 million users. It’s valued at $1 billion.

The most obvious and immediate opportunity on Clubhouse is for brands wanting to drive thought leadership and generate new business leads, particularly within the subject areas which are popular already on the app – think tech, wellness, business and trading for a start. The app currently gives you access to early adopters who are passionately interested in a particular subject matter, so if you have something interesting to say or can answer questions with authority, then you can have a platform on Clubhouse. There’s also the opportunity of sponsoring popular rooms – much like you can at a real-world industry event. Many of the current Clubhouse users are Silicon Valley denizens, and rooms are being used to pitch business ideas and win funding from investors – with reported million-dollar deals going down within the app.