You know when your mate used to say, “If you look up stupid in the dictionary there’s a picture of you.” Well, that’s what happens to Trump if he searches for ‘idiot’ on Google. No, really. It works if you do it, too.

How can Google, the world’s most powerful search engine, be manipulated to pull such a childish prank? In SEO, this is known as ‘Google bombing’, or ‘Google washing.’

What is Google washing?

Google Bombing is the act of making a website, web page, or image rank highly in search results for unrelated, off-topic or irrelevant search terms through heavy linking. In effect, it’s the opposite of SEO – search engine de-optimising if you will. And it’s often done for political or comedic purposes, like in the instance of Trump. 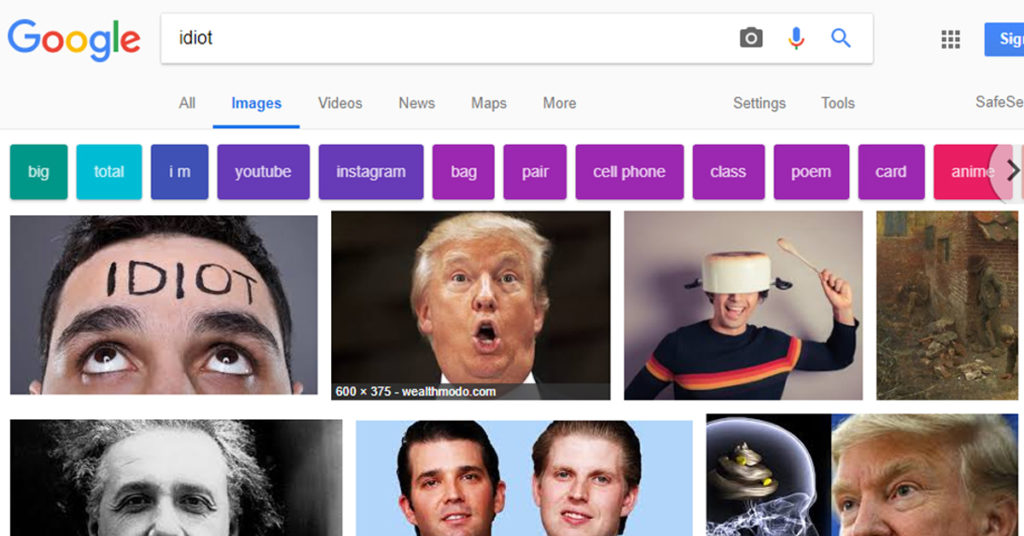 Where did Google Bombing originate?

The first known instance of a Google bomb happened in 2003, when Antony Cox created a parody of the “404 – page not found” error message in response to the Iraq war. The page looked like any other error page, except it said instead: “These Weapons of Mass Destruction cannot be displayed.”

The page was shared widely and became an internet meme (bearing in mind this was 2003, before going viral was a thing). But four months later, after the meme had already died, the page began to appear in search results for “weapons of mass destruction.”

So many websites had linked to the page in the height of the meme’s popularity, that Google’s page rank algorithm had assumed it was the most relevant result. The page is no longer live, but you can find a screenshot of it on this Buzzfeed article.

Since this instance, Google bombs have been used to further a variety of political agendas, and ridicule various world leaders. One great example: George W. Bush’s White House biography was made to rank for “miserable failure” in 2006. In response to the rise in Google bombing, Google altered its algorithm to make this less effective. 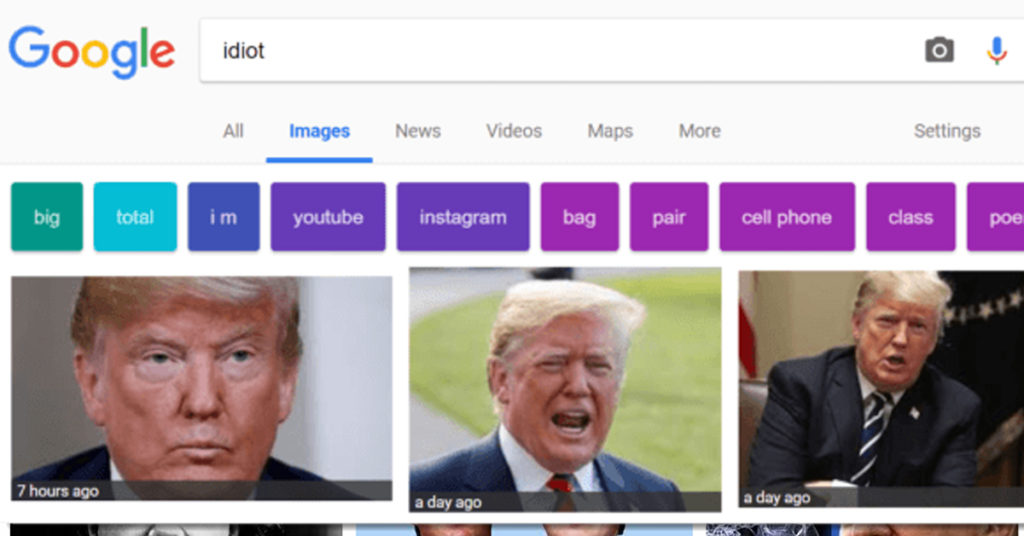 When Trump made the surprise announcement that he’d be visiting the UK in July, naturally a large portion of the UK population weren’t particularly enamoured with the idea. There was a campaign to make Green Day’s American Idiot hit No.1 in the music charts within hours.

Off the back of this, several posts on Reddit associating Trump’s name, photo and the word “idiot” received tens of thousands of upvotes, which Google values highly as a ranking signal. From there it snowballed into an all-out web assault, with articles written about the Google Bombing only adding to the effect it was already having.

The only difference in Google bombing in 2018 is that (sadly) Google already had the algorithm updated in place to tackle the problem head-on. The Quality Update of May 2015 means that content is assessed much faster than it was back in 2003. But the 2016 update dubbed Image Drop perhaps had the biggest impact, affecting half of all images ranking on page one. Although there are still two images of Trump appearing when you search for ‘idiot’, it’s nothing like the glorious results that were returned in mid-July.