We recently concluded a paid social media campaign for Young’s Beers, one of our long-standing beer brands, to commemorate 184 years of tasty brewing. Young’s Beers had kindly decided to offer their punters the opportunity to redeem a free pint within any of the participating Young’s pubs and wanted to make the most of the opportunity by reaching out to other would-be members of the Young’s community. This was the first time that paid media activity of this kind had been used to boost the brand’s birthday celebrations, and we were excited to be given the opportunity to grow the community at a significantly increased rate when compared to regular organic growth. 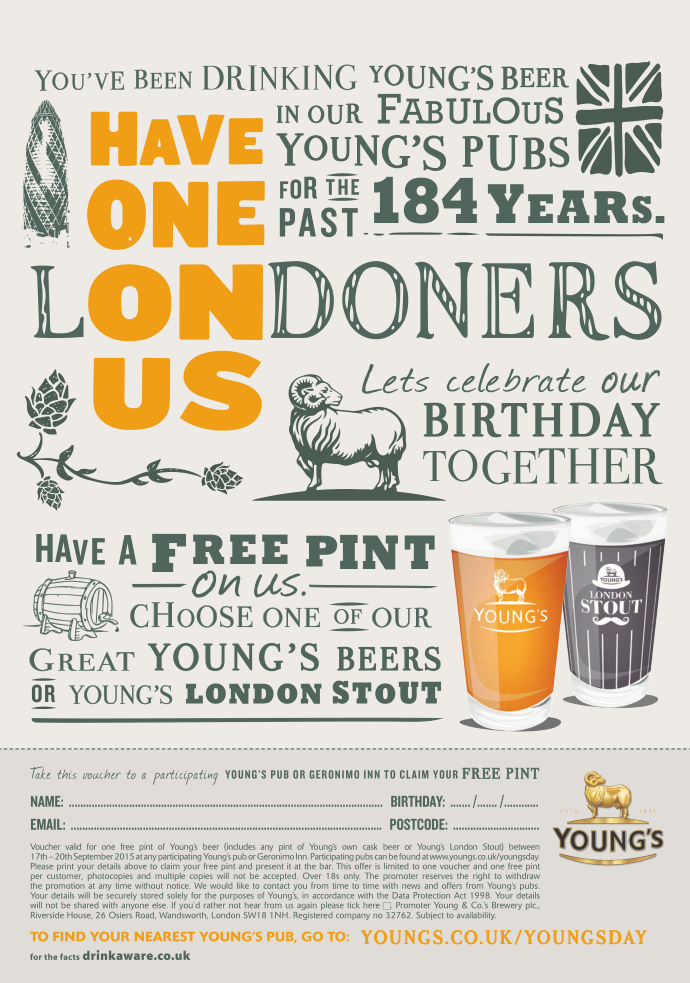 Paid media campaigns conducted through Facebook allow for users to be targeted based on their interests as ascertained through their behaviour within the platform. This allowed us to structure and carry out a tightly targeted campaign, serving ads that both functioned as offer redemption mediums as well as page like accumulators to an audience we knew would want to hear what we had to say – have one on us! We targeted users who had displayed a proven interest in pub culture and real ale, with the goal of linking the online campaign directly to the pub culture, and drove ale fans of all ages into their local Young’s pub for the duration of the campaign.

The campaign was a great success, with the Young’s Facebook community nearly doubling in size in less than a week. We learned a lot about our new audience, and made some serious headway in connecting the brand to a younger generation of ale drinkers and pub goers.

Despite the campaign now being over I’d highly recommend any of the beers that Young’s has to offer. Starting in November, and for a limited time only, you can even get yourself a pint of the famed Christmas Ale!