App Indexing – What Is It And and How Will It Change Search?

Back in October 2013, Google announced app indexing, a new capability of Google Search which lets you index content from your Android app. Over 1.5 years after app indexing has been announced, we look at how it has developed since then and how it might change Search in the future.

What is app indexing?

According to Google, app indexing lets Google index apps just like websites. Deep links to your Android app appear in Google Search results, letting users get to your native mobile experience quickly, landing exactly on the right content within your app.

For example, a search for the movie “It’s a Wonderful Life” on a mobile device that has the IMDb app installed, will return an IMDb result in addition to IMDb app result: 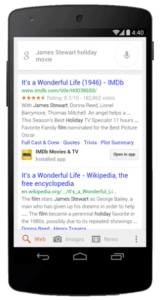 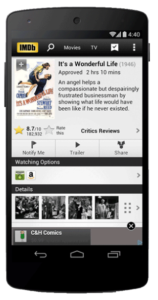 Although app indexing was announced in 2013, it has only been given more attention at the beginning of this year:

“Starting today, we will begin to use information from indexed apps as a factor in ranking for signed-in users who have the app installed. As a result, we may now surface content from indexed apps more prominently in search.” (Google, 26th February 2015.)

There are some recent developments which might be somewhat of a game changer!

Why is app indexing so important?

With Google releasing their mobile algorithm I April 2015, we have seen a major shift towards the importance of mobile search. This was only backed by Google’s statement in May 2015 that “more Google searches take place on mobile devices than on computers in 10 countries including the US and Japan.”

Search Engine Land’s Neil Patel suggests that app indexing signals a more important trend in the evolution of mobile search and creates a lot of speculation as to what could be next.

What else will be indexed in the future? How will app indexing affect the search results for businesses that do not have Android or iOS apps? Will creating an app enhance a business’s search presence? How will this drive mobile usage upward?

A couple of things should be certain though:

What should SEOs do?

Clearly, app indexing has been introduced to enhance the mobile experience and encourage mobile usage. Therefore, the answer seems relatively simple: if your business or client’s business has an app, get it indexed. As the mobile universe is expanding, marketers should take advantage by growing their mobile presence and optimising mobile in every way possible.

At the very least, marketers and SEOs should keep an eye on mobile developments and consider including it in their brand’s strategy.

What is your experience with app indexing?