Other retailers would usually object to scribbling and doodling all over their catalogue, however, when one British illustrator did this to Ikea’s, the largely successful business welcomed the idea. 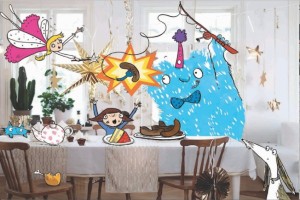 Sarah Horne, a British illustrator, used the Ikea Catalogue as a canvas for all her creative and magical ideas, depicting fantastical scenes of mythical creatures in day to day living situations and settings. Horne explained, “although I’m all grown up, my mind runs riot with the fantastical meals I always wished I could be a part of, using pages from my favourite Ikea catalogue as a canvas to bring my mythical creations a little more into reality.”

Ikea loved this idea so much they decided to use it as a marketing technique and Horne became Ikea’s first ever ‘Children’s Illustrator in Residence’. She was invited to the Wembley store in North London where she collaborated with hundreds of children and discovered their dream dinner. She then included their ideas in her finished illustrations which included fairies, yetis & more all having a dinner party together. However, the food was also of importance to the children. Therefore, in the drawings, the creatures eat such things as monkey soup and char-grilled elephant leg while using such tools as a 600 watt microwave wand.

Horne’s creative idea allowed Ikea to develop a new marketing technique. The company would use these pictures to reinforce the importance of family dinner to children and their parents. Thus, not only do the illustrations allow Ikea to emphasise their morals to their consumers, they also cleverly draw attention and advertise their products attracting adults as well as children. 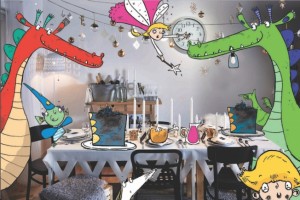