Analysing the Google Heat Map for 2014

Google’s algorithm has changed dramatically since 2005, but there hasn’t been a comprehensive study into user behaviour since. Recently, Mediative undertook that task and discovered some important changes to the way that users interact with a SERP which may have a profound impact on the way that Paid Search managers view their ad performance.

In 2005, a study was conducted which tracked the eye movements of users as they made use of search engines. The findings were ground-breaking and set the standards for which ad performance was measured. The two main conclusions of the report included that users interact most with the top left result in a SERP and spent roughly 2 seconds looking at each listing. Furthermore, users scanned horizontally for information before moving vertically. 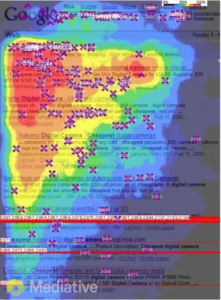 However, in 2014, the map looks entirely different. 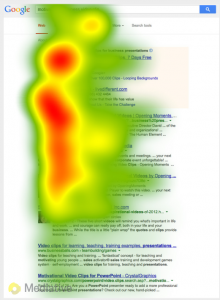 Key findings include the fact that user’s are aware that the top organic listing is no longer in the top right corner of the screen, and look lower down the page for the results they desire. In addition, the exponential growth of mobile browsing has conditioned users to scan vertically down the page.

So what does this mean for PPC advertising?

Firstly, it may challenge our notions of the importance of ad position. Being above organic listings is more important than ever, as right column ads garner very little interaction. Furthermore, if you are working with a strong brand, not being in the top position isn’t as much of a problem as previous thought (though the top position still gets most clicks, even if this number is slowly declining) as users will spend as much time looking at your ad in the second position as they would the first.

Secondly, the way ads are written needs to be much more engaging. Ads need to get to the point much quicker (with only 1.17 seconds to entice the user) and need to use as many tools as are at the disposal of the advertiser in order to draw attention to the ad (such as extensions and sitelinks).

Finally, this change in user behaviour has cemented the importance of impressions as well as clicks. The amount of interaction with the lower parts of a SERP has increased and therefore just because a user has not clicked on an ad does not mean that they haven’t taken anything from it. Comparing overall site traffic to impressions data may prove that whilst clicks don’t increase much, brand awareness is a goal which is now much easier to achieve.

It is, however, important to bear in mind that the importance of these findings will depend on a number of factors for brands; including the brand’s strength in the marketplace, the aims of their PPC campaigns and the type of product or service that they are advertising. What it does mean is that PPC campaigns increasingly need to adapt to the behaviour of users, especially in a time where the majority of business decisions include a consult with a search engine first.