Social Trend: Have you heard of Hidden Cash?

The UK has now received its own version of Hidden Cash, an “anonymous social experiment”. The premise is that an anonymous benefactor has placed envelopes with cash hidden in random locations, even in bins! Those looking to find the ‘moolah’ are provided clues via Twitter.

Hidden Cash UK was inspired by the US version, which started in California on the 23rd of May. A secret millionaire had the genius idea to hide money in places in order to give something back to his community; his identity was recently revealed.

This is a great idea in terms of engagement, with people participating actively via Twitter, posting pictures of their find. This treasure hunt is a very refreshing project and the fact that it was initiated by an anonymous – at the beginning – and was not a marketing campaign by some huge brands or corporate was even greater.

Keeps your eyes peeled, there is now a specific London project running under the handle @LDNHiddenCash. They also started in May, and currently have over 3k followers.

The phenomenon is spreading rapidly worldwide with new accounts popping up in Canada, Hong Kong, The Netherlands, and Ireland.

We’ll keep an eye on this project to see how it evolves and if more countries – and more millionaires – will participate in this real life treasure hunt! 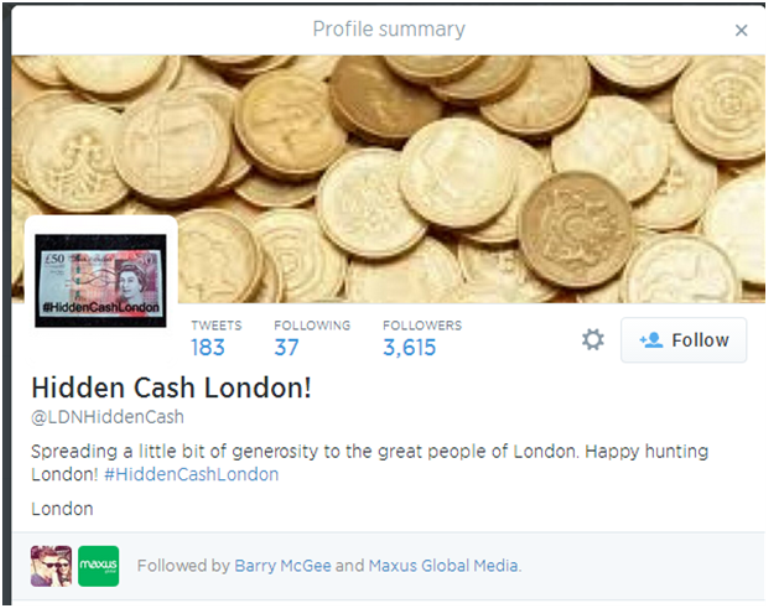