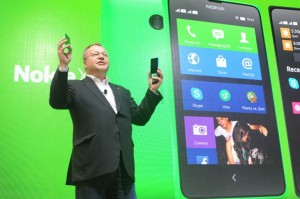 The Finnish smartphone maker, Nokia are well known for their quality hardware. A few years ago, Nokia announced plans to revamp it’s smartphone range by introducing a new OS on it’s hardware. This excited many Android fans with the possibility of Nokia’s quality hardware mixed with Google’s OS. Many were left disappointed when Nokia decided to forgo Android and instead opted to go into partnership with Microsoft and to introduce a whole new range of Windows Phones. Yesterday at the MWC 2014, Nokia did the unthinkable and announced the release of three brand new Android based smartphones.

The pricing of the new smartphones places them between Nokia’s line of “Asha” and “Lumia” series devices starting at 89 euros and going as high as 109 euros. This places them firmly in the budget range of smartphones, this will allow Nokia to compete with the likes of HTC, Samsung & LG.  The three new phones are called the X, X+ and XL.

The software on board the phones will be a heavily modified version Android and will therefore have no access to the official Android market. The phones also focus on Microsoft products such as Skype, OneDrive & Outlook.

The X will be available immediately in growth markets, whilst the X+ and XL will be released in the second quarter.