Who said social media channels aren’t built for payment transactions?
Royal Dutch Airlines (KLM) recently illustrated how customers’ payments can now be processed through their social media channels. Passengers are now able to book a ticket, an upgrade or add extra baggage via KLM’s Facebook and Twitter accounts.
In fact the implementation of this payment service seems quite easy: the passenger simply sends a request via private message, and subsequently receives a private message that contains a link to a payment method and the transaction goes through. The system is particularly effective via Facebook. In fact, there is no need to go onto KLM’s website anymore; flights can be found directly via the ‘Book a Trip’ tab, where flights can be bought directly from that page.

KLM demonstrates best practice in their customer approach; they consistently let their customers know an expected response time for their private messages on Facebook and on Twitter (see below: Twitter cover). 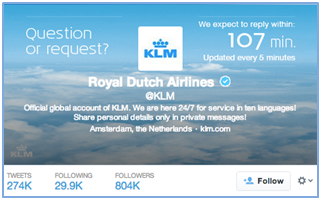 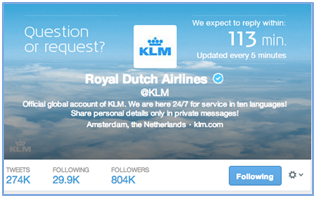 KLM has 5 million likes on Facebook and is the airline with the highest number of ‘fans’ worldwide. They have 130 social media agents answering customer’s queries 24/7 in different languages (English, Dutch, French, Italian & more). Purchasing tickets could be made easier for customers via mobile platforms such as Facebook or Twitter, however the response time of +1 hour acts as a deterrent. Customers may still prefer to make their purchase through the KLM’s website or on the phone with a KLM agent. Nonetheless KLM must be applauded for their innovation and clear attempt to stay relevant in our social media-dominated society.

It’s a big challenge to tackle, but that could enhance the company’s reputation as a pioneer in the aviation industry.