There is no question: with continuing updates to their algorithms and constant changes to the SERPS, Google makes sure that SEO practitioners are kept on their toes in their attempts to improve their businesses visibility.  Google’s latest strike gives those businesses a new opportunity to be displayed on top of Google’s search results: the Carousel!

Some industries have almost immediately received the new Carousel treatment whereas others may see it appear in the future. This leads to the assumption that optimising for the new Carousel might become vital to ranking on the first page of keyword results.

What is the carousel?

Most SEO’s will have seen or heard about the Google Carousel by now, a row of images across the top of the Google SERP against a dark background. Currently, the Carousel displays up to 20 image results and is most prominent in results for travel, hospitality and restaurant queries. 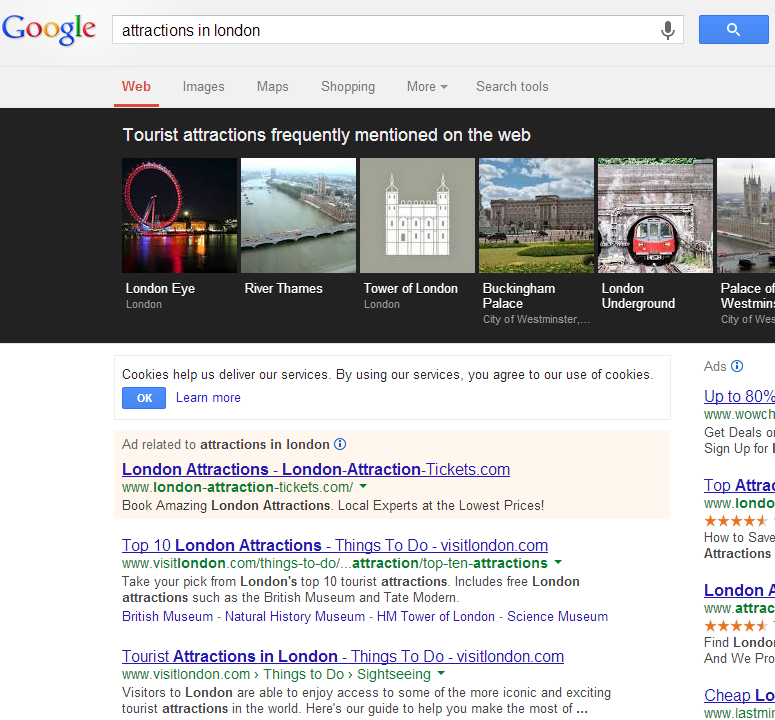 However, the Carousel also appears in other search queries, e.g. music (like the following example for the search term ‘Rolling Stones members’), sports or education which suggests that Google is expanding its Carousel to different categories and that we might see many changes and updates over time. 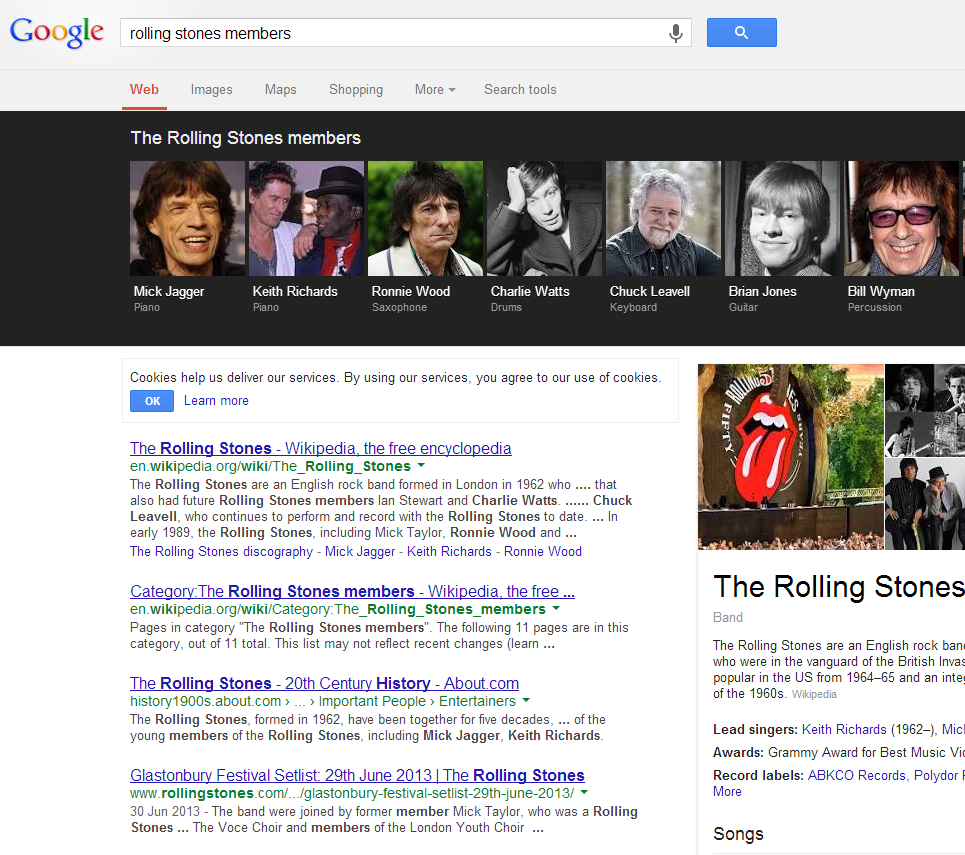 How does it work?

For certain terms, the Carousel has replaced the traditional local listings pack with the horizontal bar of 20 image-based results which are now effectively ranking in first place of the SERP.

Below the Carousel for the search term ‘Rolling Stones members’ we find a Knowledge Graph Biography including a snippet from Wikipedia as well as list of songs, albums, recent posts and ‘people also searched for’.

Clicking on one of the Carousel results leads to another Google search results page with a refined search query associated with the image clicked, and not – as one would assume – to the website hosting the image. 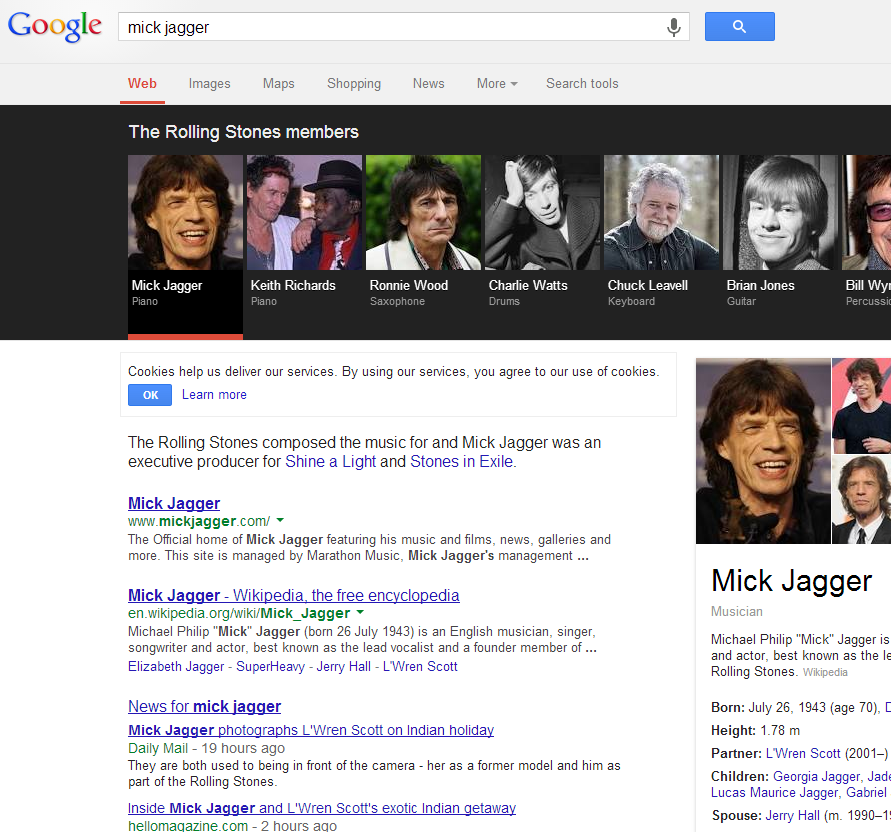 Again, we get a Knowledge Graph Biography including a Wikipedia snippet for the search term ‘Mick Jagger’ and an extract of Rolling Stones songs.

Another thing to note is that the image carousel persists. Even when clicking on all the band members’ images — the carousel remains visible.

The impact and benefits of the Carousel

The Carousel currently impacts about 14% of keywords across all industries.

The Carousel has the biggest effect on the travel and hospitality industry, followed by restaurant- and entertainment-related searches. However, with the Carousel expanding into more categories, the overall effect of the Carousel is expected to increase in the coming months.

The question that SEO’s have to ask themselves now is what factors determine the ranking in the Carousel? Since Google’s announcement of the Carousel was rather brief and didn’t reveal which factors the Carousel results are based on, it is widely assumed that these factors include the same elements that have previously been used in local search rankings – with one exception: the use of images!

This novelty suggests certain advantages for businesses: Firstly, displaying businesses in a horizontal row rather than a vertical list seems to equalise them. And secondly, having more attractive and compelling images gives businesses a greater promotional power over their competition which can influence clicks and conversions.

How to optimise the Carousel?

Optimisation techniques for the Carousel are not yet established but here are a few tips that could help get your business a step closer to appearing in the Carousel:

1. Set up a Google Places for Business and a Google+ page

2. Make sure you use high-quality and unique images across your online profiles for your business.

A thing to note here is that Google seems to prefer photographic images to logos and seeks images from business directories (such as e.g. Tripadvisor) in case it can’t find pictures that are provided by the company itself. In case Google can’t find images for a business at all, a thumbnail map icon will be displayed instead.

3. Encourage customers to review your business on Google 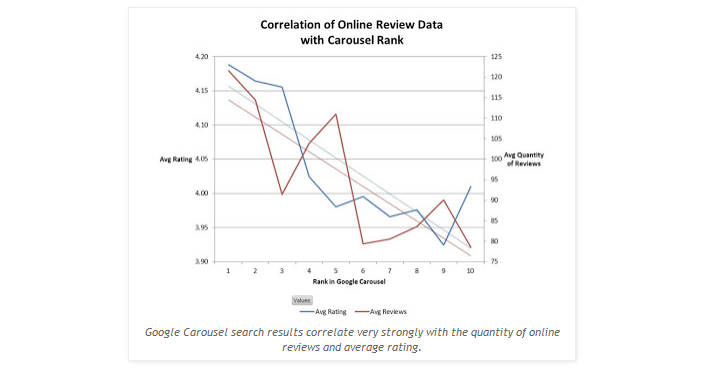 Google displays the rating value and the total number of reviews, and allows people to reorder the results according to the ratings.

4. Blog regularly and post updates to your company’s Google+ page

Social interaction seems to become more and more prominent in ranking factors and Google seems to pick up on that. The frequent interaction with customers and the creation of fresh and more content will result in Google seeing content of your business faster.

There is not a lot of research into optimisation techniques that are specific to the local Carousel just yet but the above tips along with the other standard local search optimisation elements should help to position a business well. It has been suggested that we will see a lot more of the Carousel in the future and therefore, it will become important for small local businesses in particular to position themselves well in order to compete for a space in the Carousel.