Last June, Facebook finally gave in and incorporated Twitter’s iconic ‘hashtag’ feature. Facebook users have since been able to search for and click on hashtags in order to find posts on topics they’re interested in.  So far, so good.  However, after a few months of trying out the new feature, it has been reported by analysts that hashtags are not actually adding any value to the posts in terms of greater exposure, or greater engagement. In fact, it seems that in terms of virality, reach, and engagement the feature has been more detrimental than helpful.

Can hashtags improve virality, reach and engagement? Theoretically, they should.  In practice though, it is not quite working for Facebook.

Last month the Facebook algorithm, EdgeRank Checker, analysed the difference between Facebook posts with hashtags and those without. It found no clear increase in viral reach for the posts with hashtags.  On the contrary – the viral reach was actually higher for the posts without hashtags.  This trend is demonstrated in the graph below, with a greater reach observed for the posts without hashtags. Edge rank shows a similar drift for organic reach and engagement, but to a lesser extent. Therefore interactions (such as liking, commenting, sharing posts, answering a question etc.) are not enhanced by the arrival of hashtags. 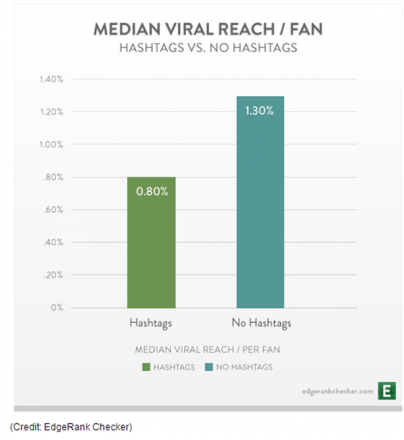 So, why are hashtags not working?

The function is new, unattractive and not particularly well integrated to the Facebook platform

The first hypothesis is that people are simply ignoring this feature because it’s new. It could also be argued that the feature is not integrated well enough to Facebook.  It’s also not as refined as Twitter’s version; where there is an option that allows users to find the ‘trendy’ hashtags in different locations.

In addition, the hashtag search on Facebook is very different from the hashtag search on Twitter, Instagram or any other platform. These let all public users appear in the results but on Facebook the search results of a hashtag depend more on the individual’s own page, friends, likes, privacy settings, and the pages they follow.  The chances are you will get different results if you search for a hashtag from your own page then if you search from someone elses page. Besides, the search results are not particularly relevant, there is no priority order or ranking for the posts with hashtags. Ultimately, there is no filter to search like the one Twitter provides (by top contributors, all, or people you follow).

Facebook and Twitter are two very different platforms. Facebook is a more private network used for chatting and sharing.  Most of the time users are actually friends with people they interact with (‘real’ friends, family, colleagues and acquaintances). On the other hand, Twitter is used more as a networking platform where users connect and interact with people they don’t know but also with businesses, brands and celebrities.  On Facebook you most likely share with those close to you, so you don’t really need hashtags to connect with them.  As the use of hashtags on Twitter seem to be more consistent, people are able to share ideas and interact with each other on similar topics without actually knowing each other. Brands and businesses also benefit from this real-time conversation with consumers, which is enhanced by the use of Twitter hashtags. Essentially, Facebook’s users don’t yet appreciate the hashtag feature because they may not need it.

Brands don’t use hashtags, or if they do, they only use them for promotional purposes

Edgerankchecker points out the decrease in viral reach for posts with hashtags, which could be explained by the way brands use them. Hashtags used in conjunction with marketing campaigns may appear too commercial for the users on Facebook. However, this is only one assumption and may not be the only reason for people feeling cold towards hashtags. So far, the feature is not being used widely by brands and businesses.  Only a few use the hashtags regularly, while some other brands only use them occasionally. As an example, Burberry makes a sporadic use of the function: in its #ThisIsBrit campaign and in a partnership with Apple where the #iphone5s was mentioned during the London Fashion Week.

In conclusion, there are 3 main reasons behind the hashtag failure on Facebook:

1)  A clear lack of appeal, practicality and relevancy,  raising questions about whether brands and marketers should start (or continue) to use Facebook hashtags at all.  Or should they simply wait until an update comes up?

2)  Facebook was late to the hashtag table, and its functionality must be reviewed in order to be truly useful for users and businesses. The feature must reach the level of Twitter’s hashtag feature in terms of functionality in order for this to happen. As mentioned above, improvement is needed on the research feature and the relevancy of results but also a section with the hashtags trends should be added.  It should also be noted that Facebook is testing a ‘trending topics’ feature on selected users.

3)  Brands and Marketers must be careful in their use of the hashtag feature. Their use of it can improve understanding of the function and ensure best practices in the future. However, it would be recommended to use hashtags occasionally rather than systematically and monitor their potential effect on virality, reach and engagement. For those who want to play it safe, the use of hashtags should probably be avoided for now.