The fashion industry takes advantage of social media in various ways; brands now use social networks to connect with their audience, approach consumers, whilst getting to know their purchasing habits and preferences. As a result social media strategies can be used to enhance the brand content and equity.

Some fashion brands have already understood that and have accomplished a great deal, gaining a large following on their different social media channels be it Facebook, Twitter, Pinterest, Instagram or Vine. Two of these brands are Burberry and Mulberry, on the other hand some huge brands either are struggling to implement their social strategy or are not even trying!

The way brands engage with consumers is crucial and social media is requisite especially in today’s hypercompetitive climate.

London Fashion Week is one event in particular that has hugely embraced social media and digital enhancement this year.

Live streamed catwalks have become more and more common and have been massively used during NYC & London events. It was possible to view the catwalk shows in New York and London from their respective official websites (http://newyork.mbfashionweek.com/live for NY & http://www.londonfashionweek.co.uk/live.aspx for London), but also on other channels such as Twitter, or the LFW’s YouTube page.

However, this is not the sole improvement, Instagram has also played a very important role bringing live updates to its users. Photographs and videos were posted straight from the catwalks, as well as backstage, giving the exclusivity of the event a brand new dimension. The worldwide reputed fashion event was made available to the masses bringing high fashion into our daily routine.

This year Pinterest, which unveiled a Fashion week photo hub, including no less than100 influencers (designers, bloggers & others) was a core focus for a lot of brands.

London Fashion Week openly embraces social media in order to increase their exposure to a wider audience. This initiative came from a deep desire by the British Fashion Council to spread British Fashion. They want LFW to not only be for the ‘Fashion elite’ & the celebrities but the British Fashion Council counts on social networks to encourage consumers to contribute and share their opinions about fashion and trends. Accordingly, if you can’t get VIP access to the catwalks, the catwalks will come to you. Live streaming shows available on your mobile, plus live updates on Instagram & Pinterest, were not the only initiatives launched at LFW. In addition, digital screens around London’s Underground stations will broadcast fashion news.

As Wallblog magazine highlighted, the most mentioned brand in social media during LFW was Burberry. The British heritage brand is one of the few successfully using social media and has once more shown its proficiency, creating content for Instagram, Vine & Pinterest but also live streaming its catwalk shows on its own website & Twitter.

It will be interesting to see which brand will have improved its social media strategy for the Fashion week in Milan and Paris. 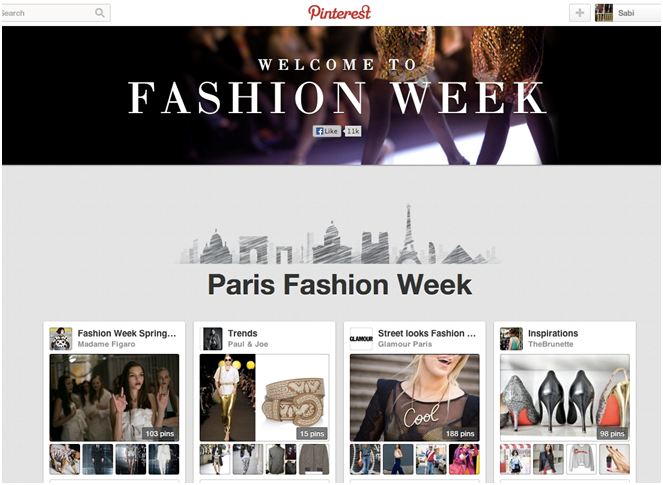