Brands are logging into Tumblr…

…but technically this is not news: the social blogging site Tumblr has been an open platform for online advertisers since May 2012, the first campaign it ran was for Adidas. However, it is only since Tumblr was bought by Yahoo in June 2013 that we have seen brands experimenting and testing their Tumblr marketing campaigns with greater curiosity and ingenuity.

In a nutshell, Tumblr’s key selling point is the ease with which brands can create and post original content in the form of photos, videos, texts etc., and with which they can share this content with many Tumblr users. The best work I’ve seen so far was produced by the Art Institute of Chicago: to promote its new exhibition Impressionism, Fashion, and Modernity. The institute created a Tumblr profile page specifically for a fictional character, Mr Jean-Paul Brunier, a 19th-century Parisian fashion enthusiast who travels through time to 21st-century Chicago, and posts his observations about contemporary fashion. Genius! 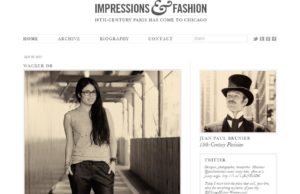 With every online advertising platform which has come into being, we have seen at least one exciting new innovation. Google Adwords has perfected paid search based on keyword bidding and Facebook Advertising has allowed us to show highly targeted ads to the right audiences based on Facebook users’ interests. Now, Tumblr seems set on pushing the boundaries of digital marketing through the sharing of engaging content.

Fortunately for digital marketers, analytics tools have already been developed to measure the performance of Tumblr activity, using variables such as total number of interactions and consumer reaction.

So what are YOU waiting for? Is Tumblr the right platform for promoting your business? Then do your research and get started!