Whilst ad spend on mobile phones is still lowest compared to computers (largest) and tablets, it’s hard to ignore the increasing importance of mobile marketing. Estimates from media investment management firm GroupM show that by 2014, around 1/4 of display spending and 1/5 of search spending will be on mobile devices.

These numbers are quite staggering, you can choose whether or not to believe them. But there is no doubt that the mobile market has grown considerably.

So what does this mean for Desktop Advertising?

I’ve read a couple of times that desktop advertising could fade out in the near future just as is happening with print. 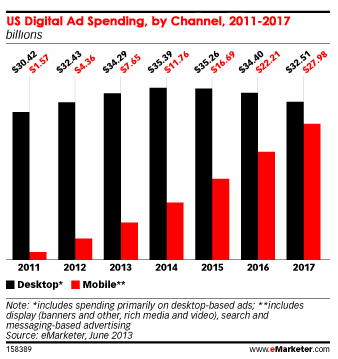 This suggests that desktop ad spend should stay relatively at the same rate with mobile steadily catching up, so it would be reckless to start ignoring desktop, but it could be even worse not to take full advantage of the rapidly expanding mobile ad market.