Sad news this morning for anyone fond of internet nostalgia (myself included) as Yahoo have announced their plans to shutter the legendary AltaVista search engine.

Originally launched in 1995 back when the internet was all fields, AltaVista did a commendable job of making it possible to find websites without needing to know the exact URL beforehand. At its peak, it had logged over 20 million pages using primitive crawlers to determine their content. This was truly ground breaking stuff at the time when competitors were boasting about having logged 2 million.

It’s easy to forget how far things have come since then. Now you can just fire up your smart phone, Google the best local restaurant and post an invite to your Facebook buddies. Friday night is sorted.

AltaVista existed in the days before WiFi. It existed when having a PC in your home was a luxury. People thought you might break a computer by pressing the wrong buttons. It was a time when you dusted off your Encarta CD-ROM for homework assignments, when you used your age in your email address and when you were pre-occupied with finding cheat codes for Quake and Doom. You could finally check if anyone else was using your really cool band name, so there wouldn’t be any issues when you and your buddies became famous rock stars. If you made plans with your friends, you better have been there at the right time…

For many people, AltaVista provided their first glimpse at the possibilities that lay behind those ‘free 30 day internet trial’ CDs that came through the post every other morning and were soon replacing coasters in many households.

They paved the way for Google and made the internet accessible to people who had no idea what they were doing.

The company was sold a number of times before ending up with Yahoo in 2003. Perhaps, just maybe, if the planed IPO had gone ahead and not been scuppered by the dotcom boom, we’d be including their name in the recent NSA murkiness with the giants of today such as Facebook and Google.

Speaking as someone who has built their career around the internet, hearing those gurgling sounds from a dial-up connection and having AltaVista as your homepage was the coolest thing ever the first time you saw it, and it’s still a very fond memory for me. But then I don’t really get out much… 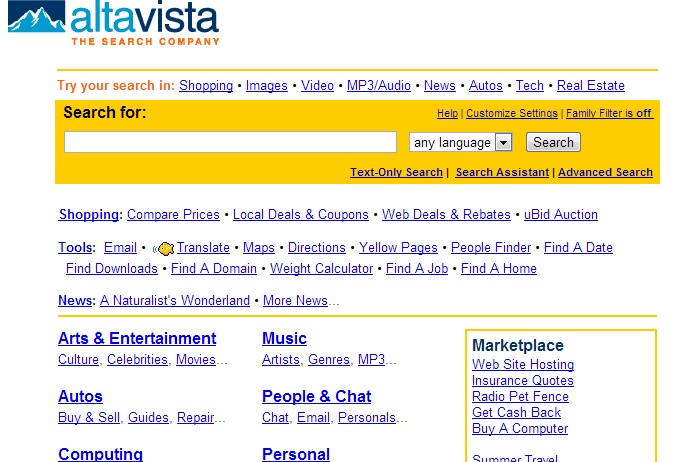