Struggling to name your first born?

Some people have their baby names lined up, ready to be assigned to their children as and when they appear, others find it a little more difficult but have a maximum of 42 days after the birth before they have to think of a name and register the birth.

Whilst many people opt for the traditional Tom, Harry, Elizabeth etc. it seems that others are now turning to the internet to name their children…quite literally.

Hashtag – Born November 2012, Hashtag was named by her parents due to their love for the social network.

Facebook – Born in Egypt early 2011, the name Facebook was chosen as a way of giving thanks to the role Facebook played in the ignition of the revolution which eventually toppled President Hosni in Egypt.

Google – Named back in 2005, Google was chosen after his Father’s keen following of all things Google and to show his dedication to all Google services.

Like – Supposedly nothing to do with Facebook, the parents simply wanted to give their child a unique name. Surely everyone else will presume there must be a connection to the Famous social network?

Heard of any other ‘unique’ internet related names? 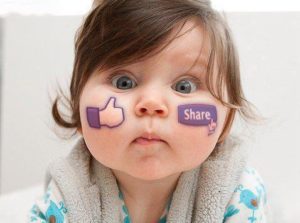