Watch or glasses – which is the future?

Google and Apple are racing in two different directions to define the future of mobile connected devices. On the one hand (excuse the pun) Apple are developing a wrist watch that includes many of the features of the iPhone with voice activated functions and a touch screen. Google have a different perspective with Project Glass, aiming to bring everything into the users line of vision via sci-fi HUD and built in camera that tracks your line of vision.

Mashable’s Poll on the topic seems to think that Google Glass is the future over Apple’s offering and the late-adopters who prefer to use neither. A similar conversation about mobile phones took place in the early 2000’s – now they are ubiquitous. It will be interesting to see if the two largest technology companies can redefine this landscape in a similar way. 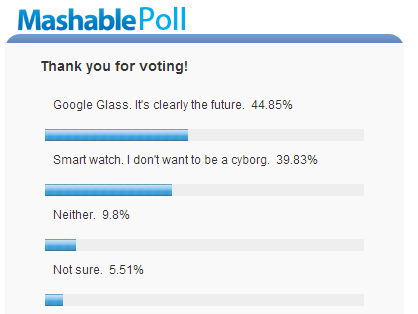