According to a report by Morgan Stanley, search engine giant Google is set to pay as much as $1bn next year to remain the default search engine on Apple’s mobile operating system iOS.  In 2009 Google paid a paltry $82m for the privilege. In comparing this deal to other platforms, Google is set to pay the Mozilla Foundation $400m next year indicating that Apple may represent about one third of Google’s distribution.

Morgan Stanley Analyst Scott Devitt put Google on his “best ideas” list for investments, in a report titled, “The Next Google Is Google.”

Every dollar of revenue Google makes on iOS thanks to advertising and data collection, Apple gets 75%. This number is only set to get bigger as the number of iPhone and iPad sales continues to grow.

Here’s a table from Devitt breaking down how much he thinks Google pays for total Traffic Acquisition Costs (TAC): 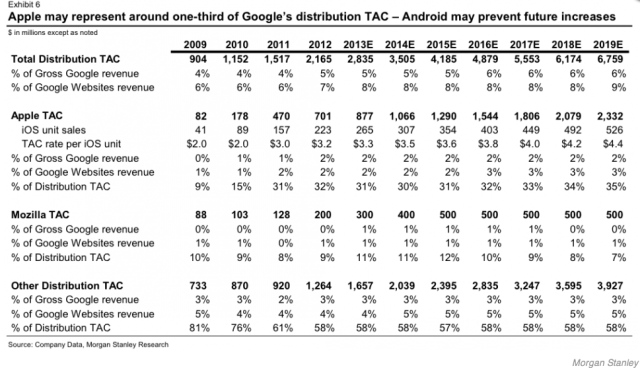