Instagram could have lost as much as 25% of its user base last month following an update to its terms and conditions, according to AppData. The photo-sharing service, which was bought by Facebook earlier in 2012 for an estimated $1bn, announced plans to change its terms and conditions that some users felt would all them to sell photos for use in advertising.

The news instantly went viral, prompting many users to say they were going to close their Instagram account in favour of other photo sharing sites such as Flickr. Following the outcry, Instagram CEO Kevin Systrom issued a blog post apologising for the vague language used in the updated terms and conditions, and that the service would not be selling users’ photos for use in advertising.

Instagram has now announced that it is revising its terms and conditions, with publication of a new set ready for the 19th of January.

A tough lesson for both Facebook and Instagram that shows that the viability of any social network is only as plausible as the userbase feel is acceptable. 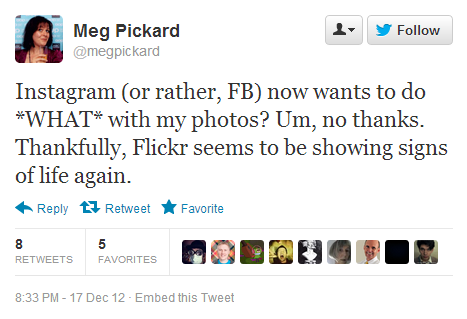