Twitter are currently trialing the ability for users to download an archive of their personal tweet history in a number of file formats including CSV and html.

Earlier in the year the NYT reported that Dick Costolo, CEO of Twitter, promised users they were looking into ways that allowed for such a feature to become a reality.

It seems only a small percentage of Twitter users have the feature available at the moment, but this could be widespread soon if testing is successful. If you’re one of the lucky few, you’ll have a “Your Twitter Archive” option on your settings page.

The move is particularly interesting, not because Twitter is playing catch-up with Facebook, but because it allows for easier self-analysis for brands.

It’s unlikely Twitter will be able to differentiate between a personal user and a brand, meaning if the feature did launch for the rest of us, we’d be able to explore a brand’s change in messaging and tone chronologically with relative ease in comparison to current methods.

Using other tools like Radian6 and Tweetreach in conjunction with a .csv archive of history tweets will also allow for great detailed data visualizations that can ultimately help brands decipher what works, what doesn’t and what could be changed. 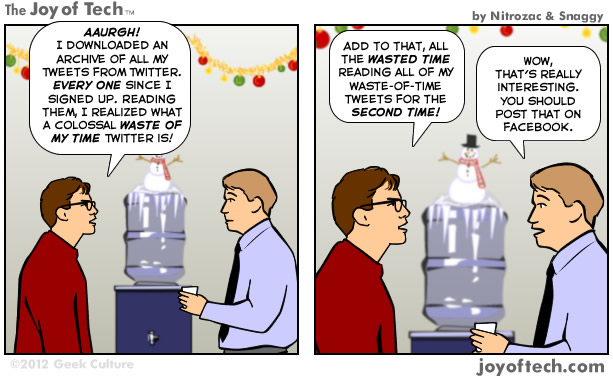