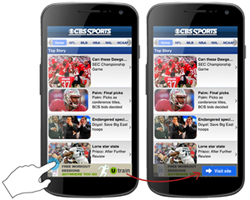 Google have announced the implementation of a new “confirmation” click aimed at combating accidental clicks on in-app mobile ads. This will occur when the ad is pressed on the edge of a banner ad, Google say that this has already proven to increase conversion rates but in some cases reduce click through rates.  This joins Google’s efforts from a few years ago when they implemented a confirmation click to text ads on mobiles in which if a user doesn’t click on the arrow in the ad they are prompted with a confirmation button. With these changes, mobile app advertising should become even more effective.