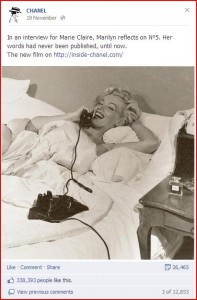 It is extraordinary how iconic celebrities from a bygone age, can have such an enduring popularity today. They are like mythological creatures, re-emerging from their ashes to transform into an all-new presence which permeates our popular culture. The glamorous images of late stars such as James Dean, Elvis Presley and Audrey Hepburn, have already proven their enormous appeal in advertising across all media. However, Marilyn Monroe has recently done a spectacular comeback of her own…in the social media world!

The new Chanel n°5 ad featuring the famous actress, released last November, is now one of the most shared Youtube ads of all time. The video ad, entitled Inside Chanel, contains exclusive photos and never-before-heard audio of the star talking about Chanel n°5, which was her favourite fragrance. Because she was so integral to the theme of Chanel’s campaign, which expanded across all major social networks, most notably Facebook and Twitter, Marilyn was propelled back into the public consciousness. Who would have thought that the ultimate blonde movie star of the 50s, would resurface as a successful internet meme?

As a testament to Marilyn’s über-mythical status, one exclusive photo of her, which was added to Chanel’s Facebook Fan Page, garnered, at the time of writing this post:

Astonishing figures for a post about someone who died in tragic circumstances 50 years ago.

With the amazing “Sharable” power of an iconic star now tested, I am sure that we will see more and more social media advertisers requesting the help of late celebrities for their campaigns. What goes around comes around, eh?