In my previous blog post I shared Nielsen’s findings of how Google+’s growth increased by 80% since its launch. Yesterday, Google announced statistics regarding its “social” network user base and the launch of Google Communities – its answer to Facebook Groups.

“Social” because they actually branded their network a “network thingy”, with its range of services residing underneath a “layer” of social. At the same time, it was an obvious move to differentiate themselves from other social networks (Facebook, Twitter).

In total they have 500 million users, of which 135 million are active. The number of active users rises to 235 million if you count  “cross-service” integration: hanging out in Gmail, connecting with friends via search etc.

It’s interesting what they constitute as an “active” user. It seems at the moment that if you’re using Google services linked to G+ you’re automatically active. Though 135 million users active on the stream itself is no mean feat considering the skepticism that exists.

The Wired have done the math and Google+ is growing at the same rate Facebook did in 2008.

I believe the growth will continue, and so will the activity- simply because of increased integration. Facebook have proven in the past they are able to overtake other social networks based on the quality of their platform and UI, so it’s not inconceivable that Google could do the same. It’ll also be worth keeping an eye out on what they look to do with their other social properties (Orkut, Blogger) in the long run. 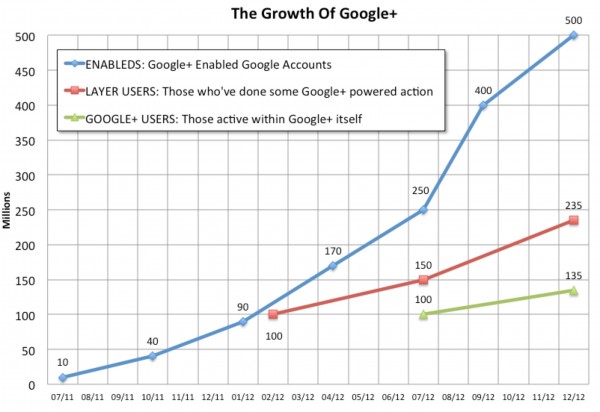