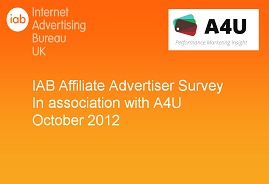 The 2012 IAB Affiliate Advertiser Survey results were released yesterday and can be downloaded here.  It makes for some great reading and shows that as the industry matures, it’s getting more and more attention from marketing managers who now view this channel as an essential part of their online mix.

The survey used a sample of 115 advertiser and merchant companies between September and October 2012. The main objectives were to ‘size the growth of advertising spend on affiliate marketing channel, map trends, and identify sector hotspots and opportunities’.

The annual survey is probably the best indicator of the health of the UK industry. Anecdotal evidence has pointed towards a positive future in affiliate marketing during 2013, but now the survey has provided some really great stats to reinforce that optimism.

Some of the more interesting points that I took from the survey are as follows:

Retail and travel are still the largest verticals respectively, accounting for 54% of the market share combined. Financial services come in third at 14%.

One of my favourite statistics is that programmes investing more than 31% of their marketing budget in the affiliate channel rose by 45% over 2012 compared to 2011. This incredible stat shows just how important the channel is becoming for some advertisers. It also demonstrates how affiliates can really hold their own compared to the traditional go-to channels like SEO and PPC.

23% of those surveyed reported that their affiliate programmes were established sometime in the previous 12 months. I think this shows that affiliates have become a serious consideration in the marketing plans of most brands. The value of the channel is apparent and personally I would expect to see similar results through 2013.

No real surprises in the ‘principal revenue sources’ section, as Cashback leads the way followed by voucher codes sites.

One of the more surprising statistics involves the use of multiple networks. The number of programmes using 2 or 3 different networks has increased since 2011 and the number using a single network has decreased.

I find this particularly notable as I’ve never understood the appeal of using multiple networks. It won’t matter much to an affiliate which network your programme is on if the promotions and commission offer good value. Most serious affiliates have joined every network imaginable anyway, so it seems strange to saddle your programme with two network account managers, two platforms, two network fees, two set up fees, etc. (Very glad to see Geno Prussakov agrees)

The only benefit I can imagine is that the networks might work harder for your programme if they know they’re in competition with someone else. However, good relationship building with your account managers should have them working hard for you regardless.

All in all, it seems the affiliate industry is moving forward at a relentless pace and solidifying its position as an essential part of any brand’s marketing strategy.