Here at Tug we are fortunate enough to have a stunning building with a top floor which can only be described as the perfect place to hold a party. With views over Shoreditch, and throngs of hipsters passing by outside, it was only natural that we would want to have a little shindig for Halloween this year. So after consuming an array of drinks ranging from your standard beer and wine, to eye-watering bloody mary’s with chasers of rum, what did we learn from the fun times?

1. Team Tug know how to party! Everyone made a massive effort with their costumes, which made for a really good atmosphere from the start. Finishing off your emails whilst dressed as a Mummy is a bit more fun, you have to admit.
2. Girls can’t play table football. Don’t get me wrong, I’m as feminist as it’s possible to be, but there is no getting around this one. Shrieking and arm flailing don’t count (apparently).
3. We have a talented photographer on the team, in Turan. Her photo’s are really rather good.
4. Anna is obsessed with Lady Gaga
5. Eoin is the best party guest EVER
First thing on Monday morning we rushed to upload the pics onto our social networks, because what could be better for a bit of inter-office PR, than video footage of a giant bear and a pirate doing the Thriller? Oh wait… that was the one we were saving for blackmail material…. 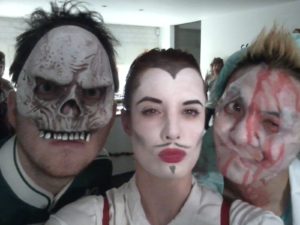