Election fever is once again sweeping across the US. Today, tens of millions of Americans will head to the polls to cast their vote for one of the two final candidates for the presidency – incumbent Barack Obama or Republican leader Mitt Romney. Yesterday was the last day of campaigning in several ‘swing states’ for the two rivals, as they tried to win the hearts of remaining undecided voters.

What we may want to pay attention to is how the whole social media universe could affect the outcome of this election. Of course, this will not be the first general election in history in which social networks were instantly accessible to open up discussions about the candidates, but the presidential race in the United States has a magnitude (and ruthlessness) that cannot be found anywhere else in the world, so it should be interesting to look into. The presidential campaigning period is a time of ubiquitous semi-propagandist media distribution – books are published, TV ads are aired, Youtube videos are uploaded, private photos are revealed – which serve either to endear the electorate to one candidate, or discredit the other. Overall £2bn was spent in the Obama-Romney race. 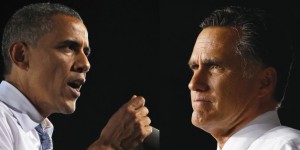 Two years after the race began, the statistics show that the candidates are neck to neck, with Obama only marginally in the lead. And this got me thinking: it seems amazing that, in this day and age, the two candidates for the most powerful position in the world can still be neck to neck! Wouldn’t unlimited access to information and constant dialogue, offline and online, have made the decision any clearer for the voters as to who to root for, or created a strong favourite? The US is a country of strong political extremes, and this does not seem to have been affected in the slightest by the technology that surrounds us. Americans, it seems, will stay true to their political and religious affiliations, no matter how well informed they are about the personalities and policies of the candidates.

But what about the as-of-yet undecided voters? With the huge amount of social media activity that is bubbling among Americans, it will be worth investigating whether online conversations influenced these voters’ decision and tipped the scale, once the results are in and the new American president is announced…

WTF IS SEO AND PPC?

This website uses cookies to improve your experience while you navigate through the website. Out of these cookies, the cookies that are categorized as necessary are stored on your browser as they are essential for the working of basic functionalities of the website. We also use third-party cookies that help us analyze and understand how you use this website. These cookies will be stored in your browser only with your consent. You also have the option to opt-out of these cookies. But opting out of some of these cookies may have an effect on your browsing experience.
Necessary Always Enabled
Necessary cookies are absolutely essential for the website to function properly. This category only includes cookies that ensures basic functionalities and security features of the website. These cookies do not store any personal information.
Non-necessary
Any cookies that may not be particularly necessary for the website to function and is used specifically to collect user personal data via analytics, ads, other embedded contents are termed as non-necessary cookies. It is mandatory to procure user consent prior to running these cookies on your website.
SAVE & ACCEPT