Microsoft has been given a formal warning by the European Commission and could face a multimillion pound fine for failing to give customers a choice of internet browsers, effectively forcing customers to use their own Internet Explorer browser. This follows an order given three years ago, that Microsoft agreed on, to provide users a free choice of browser to prevent the tech giant from using their dominant position in the OS market to also give themselves an advantage in the web browser market.

By displaying the BrowserChoice.eu website (pictured) to Windows users who have their default browser set to Internet Explorer, Microsoft were considered to be providing this choice to customers. However the European Commission has said that from February 2009 to July 2012 many users have not been able to view this screen, estimating that a possible 28 million consumers have not been given this choice. Microsoft claims that a technical hitch is to blame, but has taken full responsibility for the error and now have four weeks to respond to the charges.

The implications for the order could hit Microsoft hard financially even if they do avoid a fine, as providing customers a choice of competitor’s browsers can only have a negative effect on Bing’s search volumes as the default search engine for Internet Explorer. 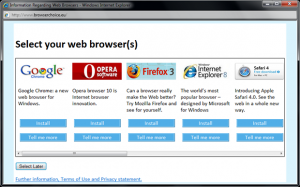