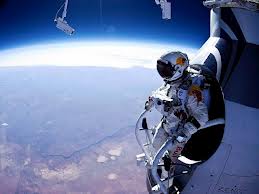 Austrian daredevil Felix Baumgartner made history on Sunday, October 14th 2012. His 24-mile plunge down to the Earth’s surface, from the highest point of the stratosphere, broke the record for highest altitude for a parachute jump.

For all we know, his historic skydive, sponsored by Red Bull, may also have broken many records for social media activity around a single event. The major social networks contributed enormously to raising interest in the feat, with millions of people (including myself!) expressing their excitement in their Facebook status, sharing links, or tweeting about it. Many celebrities got in on the action by posting tweets about the event as well. Over 7 million people watched the jump through the live feed on Youtube, and a tweeting frenzy occurred during the 4 minutes and 19 seconds of the fall. Just after Baumgartner had landed, alive and kicking, a photo of him on his knees was shared over 29,000 times on Facebook, sealing his status as a bona fide real-life hero. The progression of this extraordinary event shows how these social networks interact so strongly.

Evidently, phenomena like this show that a single event can turn a person into an overnight star, admired by millions the whole world over. Whilst stunts like Baumgartner’s would have caught the attention mostly of media outlets or people who could watch them from up close, had it happened only a few years ago, it seems that today, if you are about to perform a spectacular, never-before-seen feat, you will have the whole world watching. No pressure.