Amazon brings the Kindle Fire to the UK 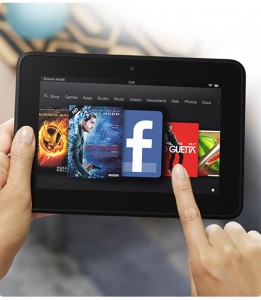 The new Kindle Fire HD features a new HD display, a fast Wi-Fi connection, Dolby audio, a powerful processor and graphics engine, 16 GB of storage, and 11 hours of battery life. All backed up with Amazons own eco system which will allow you to download books, magazines, music, films & more directly to your Kindle over Wi-Fi. The original Kindle Fire was also upgraded with a faster processor, twice the memory and a longer battery life. The Amazon owned, LoveFilm will be providing the film downloads to the UK market.

This is clearly an attempt to compete against Google’s Nexus 7 tablet along with Apple’s iPad. For a price of just £129 – it will be interesting to see how the market changes very soon!