The Facebook “like” button has become an iconic part of the Internet over the last two years since its launch, but the next stage for the social network is to introduce a “want” button for products and pages – something brands are very keen on having. In July, there were several reports that Facebook are set to introduce the ‘Want’ button in a test phase to certain brands and businesses who are currently using the social network.

This comes hot on the heels of Facebook’s first attempt at f-commerce, turning the network into a marketplace for goods and products, including the introduction of a Facebook currency.

A ‘Want’ button could potentially give brands and advertisers access to a huge volume of data regarding purchases and would be much more active indication of intent to purchase than clicking ’Like’ which could, in a sense, describe anything from casual interest to a deep intention of desire or love for the brand.

Blogger Tom Waddington who discovered the code for the button recently told Mashable: “It’s definitely been worked on. This shows that it’s still under active development, rather than being a ditched project. The fact the code contains references to ‘social commerce’ is a sign that they’re taking it seriously. In the same way music, news and videos are shared on the site, Facebook is planning to allow users to share both Wants and Purchases, from items bought within games to donations.” 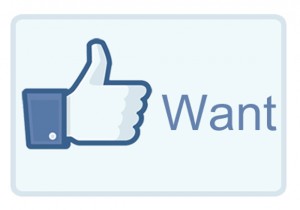