Google+ gets an upgrade

More than 170 million people have joined Google+ since its launch in June last year, yet it is still in the early days of its development. To improve its offering and increase the engagement of its user base, Google have introduced a more functional and flexible version of Google+ by changing key aspects of its layout. 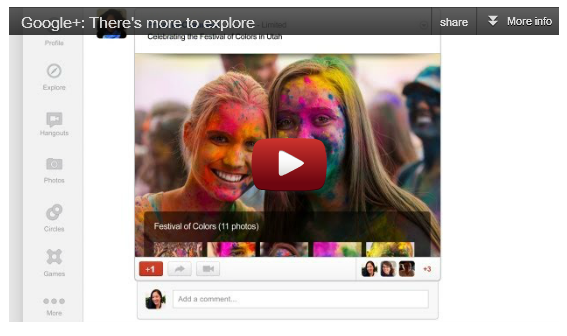 According to their blog, the updates will make the social network: ” easier to use and nicer to look at, but most importantly, it accelerates  efforts to create a simpler, more beautiful Google.”

One of the first things you’ll notice about the new layout is a new way to get around the stream. Instead of static icons at the top, there’s a dynamic ribbon of applications on the left.

The news feed will detail larger photos, conversation “cards” that make it easier to scan and join discussions and a newsfeed “drawer” that looks similar to Facebook’s side bar that provides a rolling feed of updates.

The Google+ update extends beyond navigation, the stream and hangouts. For instance: there’s a new Explore page that shows what’s interesting and trending across the network. And a new profile with much bigger photos. And a new chat list that puts your friends front and centre.

In a word, the update has made the network a lot more social.