The Variation of Google Encrypted (not provided) Keywords Between Industries

As of the start of November Google is now encrypting its user search data for searchers that are logged into a Google account and as a result they have stopped sharing keyword data for any organic search terms from users searching while logged in, currently this is only active from google.com but is expected to be rolled out to other locations. If you look in your Google analytics account you are going to see the keyword (not provided) sending traffic that meets this criteria.

So far industry figures and Google engineers have suggested that the percentage of traffic affected could be anywhere between 5-30%, with Google’s Matt Cutts suggesting that the figure would sit well below 10% while some websites have reported figures closer to 33%.

I believe this is going to vary massively per industry, dependent on the user base, for example if the audience are more tech savvy they might be more likely to have Google+ accounts from which they are likely to be logged in more often than not.  I would expect (not provided) keyword coverage to be alot higher for readers of tech blogs than perhaps food blogs.

I have analysed Google analytics  keyword data across 5 different verticals that I have access to, looking at traffic just from the US to see how this is varying after just two weeks and as expected this differs hugely from site to site and industry to industry.

The following shows the percentage of US organic search traffic coming from (not provided) keywords, in 5 different industries 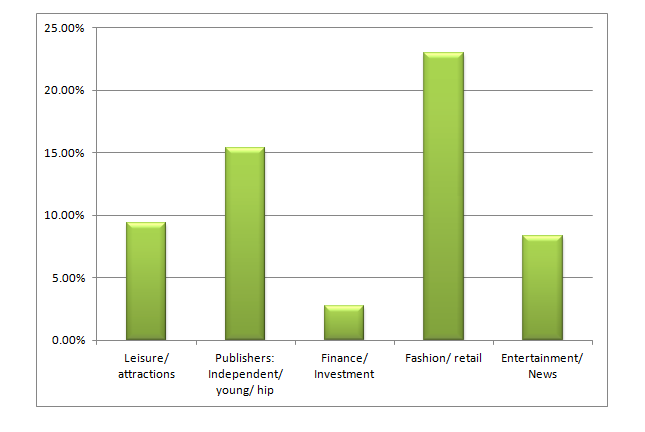 From my knowledge of the websites used for the 5 industries above the two industries with the largest number of visitors coming by way of (not provided) keywords have the youngest target audience, which again suggests that websites that attract younger more tech-savvy visitors are likely to get less keyword data, than say finance which out of the industries analysed presents the lowest number of searches from users that were logged into google.com.

I will be expanding this analysis across different industries to see how it further varies and I definitely need to look into more websites within the 5 industries above to see if this pattern continues.  What is certain is that the initial predictions of (not provided) keyword data being in just single digit figures is already majorly incorrect for a number of websites/ industries and depending on the uptake of Google+ this could increase at a rapid rate very quickly.