5 Tech Websites that see a huge benefit from SEO

by Carlo Pandian October 11, 2011
Internet Marketing, Search Engine Optimisation, Technology
From tech to fashion, from music to gossip, many websites offer great content but just a few have reached a global recognition in terms of visitors and awareness.
On the 11th of February Nielsen revealed that in the World Wide Web there are around 156 million blogs in existence, created since 1997 when the first “weblog” (term coined by Peter Merholz)was opened.
These are 5 tech websites that have reached this success thanks to a great SEO strategy and great content that are directed to a niche of trustworthy customers: 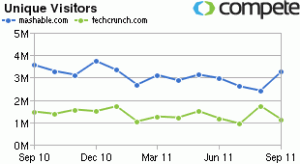 Mashable
Peter Cashmore, founder and CEO, started this adventure when he was 19 years old in Aberdeen, Scotland with a blog mainly focused on social media. His creature is now the largest independent news source dedicated to covering digital culture, social media and technology with 19 million monthly unique visitors.
TechCrunch
Founded by serial entrepreneur Michael Arrington, it is a blog covering start-ups and technology news. In his life he has contributed to many VCs and consulted start-ups and big companies such as Verisign (online and mobile banking).  TechCrunch and its network now reach 12 million unique visitors and draw more than 37 million page views per month.
SmashingMagazine
Founded by Sven Lennartz and Vitaly Friedman in the September 2006 , Smashing Magazine offers resources and advice to web developers and web designers. It is famous for the how to’s, free fonts and templates for download and its newsletter is subscribed to by over 57,000 readers in the world.
Gizmodo
Launched in 2002 by Peter Rojas, it is a technology weblog about gadgets and consumer electronics but it covers broader topics such as design, space and science.  In these years it has launched national branches in France, German, Dutch, Spanish, Italian and Portuguese. There’s also a UK portal since 2011 with news on British start-ups and trends!
Pocket-lint
Easy to use technology news site  that reviews products and evaluates future trends. Founded by the tech journos Stuart Miles in 2003, this UK portal reach around 2 million global visitors every month.
Share