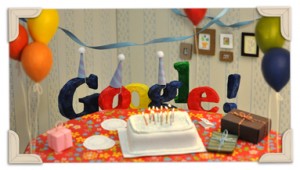 The exact date of Google’s birthday has changed and been debated a bit through the years. Google filed for incorporation on September 4, 1998, was established three days later on September 7, and the Google.com domain was registered September 15. All have been considered Google’s “birthday” at one point, but Google has officially chosen September 27 as their day.

So let’s remember how that’s all started.

The company was founded by Larry Page and Sergey Brin, often dubbed the “Google Guys”, while the two were attending Stanford University as PhD candidates. At that time Larry Page, Sergey Brin, and Eric Schmidt agreed to work together at Google for twenty years, until the year 2024. The company’s mission statement from the outset was “to organize the world’s information and make it universally accessible and useful”, and the company’s unofficial slogan is “Don’t be evil”.

Page and Brin originally nicknamed their new search engine “BackRub”, because the system checked backlinks to estimate the importance of a site. Eventually, they changed the name to Google, originating from a misspelling of the word “googol”, the number one followed by one hundred zeros, which was picked to signify that the search engine wants to provide large quantities of information for people. Originally, Google ran under the Stanford University website, with the domain google.stanford.edu.

In May 2011, unique visitors of Google surpassed 1 billion mark for the first time, an 8.4 percent increase from a year ago with 931 million unique visitors.