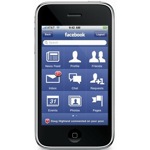 We hear new rumors about Facebook’s phone. In fact two models will be presented at the Mobile World Congress (MWC) in Barcelona, which takes between the 14th and the 17th of February. The manufacturer is HTC, the phones will keep the colors of the social network brand and they will use Android as the operative system.

HTC is the manufacturer of Facebook’s phones, according to the information published by Cityam.com. This page gives as a sure thing the launch of the Facebook phones at the Mobile World Congress (MWC) in Barcelona.

The information from Cityam.com tells us that Facebook phones will have in their home screen messages and news from the user’s facebook account. This is possible in part thanks to the Android platform, which will be operating both terminals.