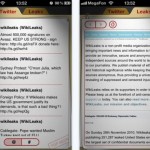 The unofficial WikiLeaks app which showed the cablegate documents adapted for the  iPhone and the iPad was removed from the App Store. Apple removed the app without giving any explanations. You could get the app for $ 1.99, although the creator said that part of the revenues were donated to Assange’s organization.

Only 3 days took for Apple to remove the unofficial WikiLeaks application from the App Store. The developer responsible for the app, Igor Barinov, received a message saying “your application is going to be removed from sale”.

No one knows why Apple has censored WikiLeaks in the App Store. It is true that it was a paid application which provided content that it was available to everyone free of charge. However, I doubt that’s the reason why the app is no longer available….