Think of Pay Per Click (PPC) and it’s not long before your mind tries to grasp the billions of dollars that Google generate from its Adwords platform.  A vision of Scrooge McDuck diving into his vault of gold in the opening of Ducktales isn’t far off my idea of Larry Page’s life.

It’s a place where companies and their incumbent agencies fight tooth and nail for a piece of the traffic pie with special offers, quirky ads and increasingly higher cost per clicks, yes we can be tactical here, but all you’re striving for is a bigger slice.

So why not go get yourself a slice of cake too – or pizza, or cheese – whatever metaphor makes your mouth water.

Bidding outside your typical industry keywords is becoming a bit of a trend of late, whether it be Ann Summers stealing some exposure by bidding on the BA strikes or the Virgins Guide making an assumption on World of Warcraft’s demographic (see image below).

The message here is that it’s important to be creative in every aspect of your PPC campaign. Not only to feast on traffic but also give some personality to your campaign and brand. If anything, you’ll at least get some bloke named Chris blogging about it… 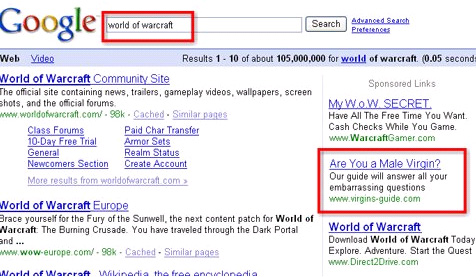