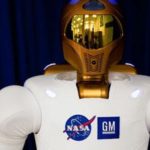 NASA is developing a robot (Robonaut 2, R-2) which will be able to tweet from space all its adventures. Robonaut is already tweeting and has 15,978 followers … “Not there yet, but all packed up and ready to go. L-20 days!”

It looks like R-2 will be sent into space on the 1st of November, the space shuttle is called ‘The Discovery’.

Robonaut 2 was created through a joint project between NASA and General Motors, which began back in 2007, but NASA wants to test its response to microgravity, so first it will join the crew of the S-133 mission.

If want you to follow its tweets, visit @AstroRobonaut