Another Amazing feature from Google! 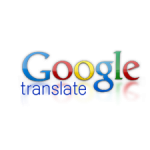 Google have now given us the ability to talk to anyone and everyone, no matter what language they speak, thanks to their new tool “Google Translate Conversations”.

The news was announced yesterday via the Google blog, and we can expect to see this tool exclusively on Android phones within the next few months.

The concept of the new tool allows you to speak into the android phone and it will then convert what you  have said in to the desired language you want to hear back, which will smash what we know as the language barrier and open up a world of possibility & opportunity. Check out the video below featuring Eric Schmidt Google’s CEO, going in to details about this ground breaking technology: