Watch Out Skype…. There’s a New Sheriff in Town! 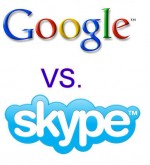 G-mail users will now have the ability to call home phones and mobiles straight from the convenience of their email accounts. Which is going to serve up some competition with the other operators such as Skype, AT&T Inc and Verizon Communications.

Typically, this new feature will benefit the American contingent of the world first, with Google Promising free calls within the US and Canada. Whilst calls to Britain, France, Germany, China and Japan would be as low as 2 cents per minute. Calls that cost money will be charged from an online account that users can top up with a credit card

“This is a risk to Skype. It’s a competitor with a pretty good brand name” said Hudson Square analyst Todd Rethemeier.

The New Google Service seems like its major advantage will be International/US calls for Gmail users of the US, but I’m sure that Google will be looking to push the boundaries and tie this new exciting service in with their plans of Global Domination!