Today Flickr announced that they are rolling out a new Photos page to all of it’s users, see below for a list of new features taken from the Flickr Blog:

“Bigger photo: We’ve increased the default view size by 28%. Your cameras will be happy that your photos now take advantage of increasingly larger and higher resolution displays! We’ve also built a new lightbox feature. Click on any photo or use the magnifying glass icon to browse through large photos on a dark background. Just you and photos — no distractions.

Navigation: Getting from one photo to the next is faster and easy. Move forward and back with ever-present navigation buttons above each photo. Want to get from one context to the next? Go from your photostream to sets to groups to any number of ways that photos are organized on Flickr is simple via the upgraded film strip on the photo sidebar. Click on the title of any film strip to switch contexts. Preview five photos at a time within the context of your choice, too.

The story: Your photos already carry the narrative elements of who, what, where, when and how whenever you upload them to Flickr. Browse Flickr and you’ll see stories within stories — photos within photostreams within groups or any kinds of combinations. So we’ve made it easier to find when a photo was taken, it’s location, camera/exif info and your name in one location to the right of the image. Along with the title and description and we think that photosharing will increasingly become story-sharing.” 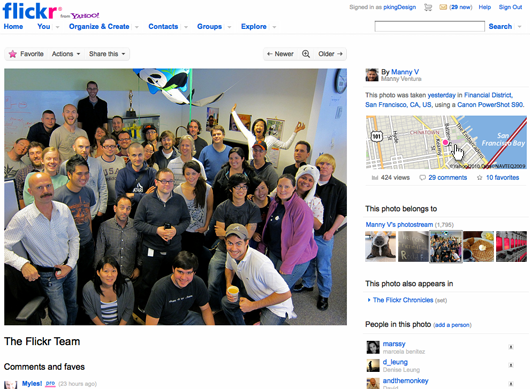