by Faye Daffarn May 5, 2010
Internet Marketing

At the last Election in May 2005, social networking sites were few and far between.  YouTube had only been going for 3 months, Facebook was largely unheard of and no one really used blogs.  How different that all looks 5 years on.

It was predicted to be an ‘Internet Election’ with savvy politicians instantly updating their followers through Facbook and Twitter.  In fact, it hasn’t really been the important player we all thought it would be.  Party officials are insisting on vetting new material before it’s posted on blogs, with good reason (think Philip Lardner suspension ).  And Twitter  hasn’t delivered as a campaigning tool either – great to spread the word but not at directly communicating and engaging with voters ( another politician gaffe by Stuart MacLennon ditched for being a ‘Twitter Twit’!).

Don’t get me wrong, we’ve seen a great variety of new media tools being used throughout the Election such as blogs and podcasts, with both Cameron and Brown posting weekly.  Campaign posters have been photoshopped and gone viral, e.g. Labours Ashes to Ashes poster.  And of course we’re all Googling like mad to find out more about parties, policies and politicians.  For example the first leaders’ debate on April 15th grabbed  a lot of media attention with a 3.6% increase in visits to political sites, and searches for ‘Nick Clegg’ coming out on top, with a few peculiar and less expected keywords making an appearance such as ‘Nick Clegg height’ and ‘Nick Clegg atheist’! 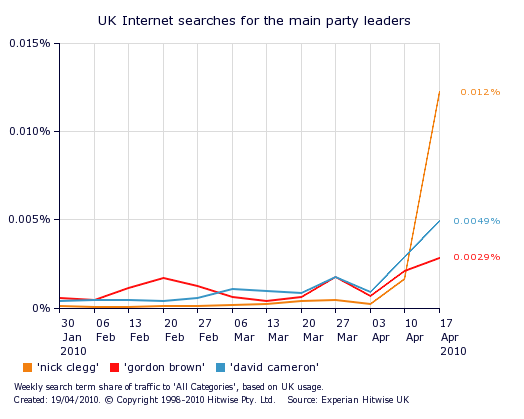 New media hasn’t then been a replacement for traditonal campaigning but it has meant more people can be involved more closely and that word gets around quicker.  It’s anone’s guess what the campaigning landscape will look like in another 5 years time.